The main rationale being that only active users wishing to aid in cleaning the site need to get involved.

Why do we hold these meetings?

We like to be open with what we do in the sopython community and with what plans we have for the future.

As such we like to hold these open-house meetings every once in a while for the development team to let everyone know what they’re up to, as well as letting anyone voice any opinions they have to the community at large (be they positive or negative). If you cannot attend the meeting but would like to be involved within sopython then you are of course welcome to bring this up with one of the room owners at a more convenient time.

Room is dystroy.org/miaou/100?python-meeting btw
@Ffisegydd What’s that?
Jon had the idea of using this 3rd party chat room for the meetings.
I think his idea was that, say we had to get a bit mean/nasty/honest about someone then we could maybe cut that back from the transcript, it also stops people joining mid conversation and trying to ask Python questions.
@Ffisegydd Why? It’s a sopython meeting.
Because if I want to voice my thoughts on how @IntrepidBrit is a terrible human being then I can scrub it from the official transcript. Plus there are other reasons which I won't go into here but would be happy to discuss in there :P
Well, to make it short: I’m not joining there.
@Ffisegydd To be fair, you're not alone in your opinion. The whisky agrees with you, and that's why it keeps trying to drown me
@poke, do you have any particular reason why you don't like the idea of it?
Because: (1) the whole sopython thing is already turning into a heavily fragmented thing; (2) discussing the project about a chat community on some other chat platform is absolutely ridiculous; (3) by moving to another platform, we raise the complexity to join the discussion/project a lot
@poke Why is it heavily fragmented?
That sounds like a proper concern to raise in the meeting.
The chat room tools offered by Stack Exchange fall somewhat short.
@MartijnPieters SO chat, GitHub, Slack, Trello, another 3rd party chat?
@Ahmad: dystroy.org/miaou/100?python-meeting
@poke That's not fragmentation, no.
That's just using tools to help organise. They are all open.
We're encapsulating functionality :-)
@MartijnPieters They are tools partly covering the same purposes though. It’s not clear when to use tool X over tool Y when both would work for a certain thing.
My boss has just come so I may have to disappear, poor timing.
How about we have this meeting in that chat room, and add "decide whether to have future meetings in this chat room" to the itinerary
poke I disagree with your fragmentation, each tool has it's own use. We can have the meeting here if you really insist though.
Let's have the meeting here.
Fine with me. I don't see anything on the itinerary that would require transcript-scrubbing, anyway
Yeah cool.
I disagree with having it here, and possibly we can discuss it in AOB.
Item one on the agenda. "Address possiblity of having a separate Python close-vote/reopen-vote/del-vote and flag room."
I personally don't find close vote requests to be particularly interfering.
yeah, as poke says, less fragmentation please
I don't find the close-vote things interfering either. I would find it more annoying to have a second room.
I think moving them off to another room removes the point of getting people look at the question and close-vote them.
whenever I see anything with a badge I usually just ignore it, to be quite honest
Part of coming here is also being able to see what we're likely to close, I think it's helpful to newcomers
After all, we have a lot off OT talk which is probably more interfering.
Though generally OT talk is well behaved, if people are talking Python it tends to naturally die down.
Removing the discussion of actual Python questions doesn't seem like the right move.
I’d be interested in a percentage of how many of our messages are X-pls tags… Probably very little.
Sometimes they spark interesting discussions about what the right way to approach something is (dup closes in particular.)
and they occasionally bring up good conversations, there would be much less visibility in another room
Even if we configure RABBIT to bang a gong when a post is closed, that will, at worst, double the number of close-vote-related messages. So it will jump from 1% of messages to 2%. Not that onerous, IMO.
I think we can move on to be honest. Jon brought this up so when he gets back later we can always give him his say, it might be he had very good reasons for it, he's semi-afk at the moment.
It will double the count, but it will be so worth it.
More gongs.
If messages by RABBIT turn out to be intrusive, then that’s something that should be adjusted with RABBIT. Moving them off to another channel, nobody keeps an eye on, is probably not useful.
(I rarely see any message in other rooms I have joined but not opened in a tab; and I don’t see me open a “python-cv-pls” room)
Okay, item the second Discussion on how the sopython-dev projects will fit together, as well as any updates on what’s going on
updates first, or crazy diagram?
I like diagrams :-)
Updates? If I get time I'll say something about Kesh, depends on Phil.
So if you're ready @davidism you could start without sopython-site.
I don't have anything written up like last time, but I'll start.
Development by me has been slower lately, as I've gotten really busy with my real job.
I've got a search system mostly done (although it will need improvements).
is it fuzzy?
I liked that diagram a lot, it was a helpful visualization 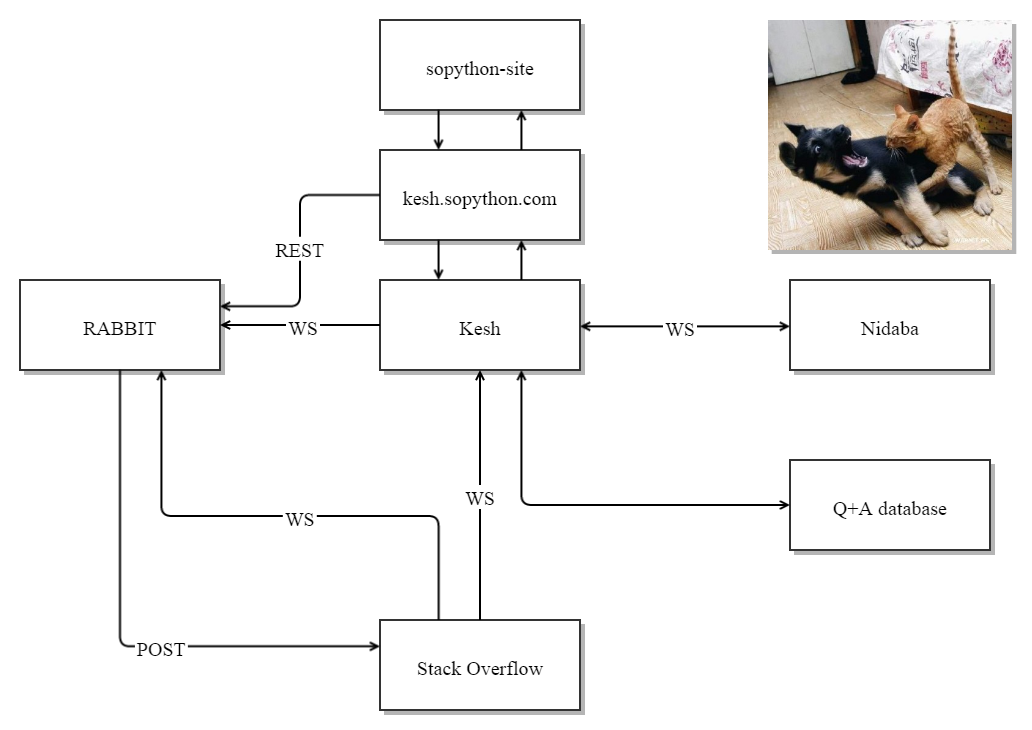 @Ffisegydd let's table that for when rabbit and kesh are more developed
Yar.
I'll add it to Trello anyway.
Ok. Finally we get to AOB.
First part on AOB is "Is it still a room for Python, or an endless conversation between the regulars?"
I believe that most chat rooms are dominated by their owners. We're not special.
This room is like the starfield screensaver, powered by @Kevin "Starbait" Kevinson.
There is an awful lot of conversation between regulars, and that's not necessarily a bad thing as if someone does need help then they can still get help.
I remember reading a post on Meta that showed that the C++ room was more than 50% RO messages. (or maybe it was the javascript room. Whatever.)
Yeah I think we were 2:1 ratio of RO:non-RO
The only complaint I can ever think of is someone who came in, said "go talk about other stuff on facebook", tried to add me on facebook, then never came back.
Other than that, I don't think it's an issue.
I don’t think we should worry about the content of our talk
Someone actually added this to the agenda, so if that person would like to voice their opinion, I promise we won't bite?
My opinion is that we have a good balance. The room currently feels more like endless conversation, but we still selflessly answer Python questions when they come in and talk about programming with some regularity. If we went to a model of "no off-topic conversation," I wouldn't be in the room.
We always talk about what we like to talk about. If that’s Python, fine, if it’s not, also fine.
If the chatroom was just about python, we'd seem like really boring programmers.
Yep.
We are a community, and we don’t need to stick to Python topics.
Which is to say, I like chatting with the people in the room and I wouldn't be here if it was expected of me to be sitting idle, working for free, until someone joins and demands an answer.
That being said, I never seen anyone not getting covered about Python stuff when there was a need for it. So it’s absolutely not a problem. And we’re probably one of the most on-topic, helpful and active chat rooms anyway.
Compared to other high traffic rooms, we probably have a better ratio
Anyway, I think we are done-ish, and I have to head off to Squash. See you later!
I don't think I need to add any more to what's been said here. The regular RO conversations act as anchors to keep people around to ask Python Qs.
Take care Poke
tra @poke
Yeah, there are some OT topics which are potentially dangerous
@poke thanks, rhubarb!
To almost-quote myself: "In any case, putting on my room owner hat, I don't think [serious discussions of religion are] a great fit here. We have people with views all the way from Guido's to Jon Skeet's among the regulars, and all are welcome, and none should have to feel like they need to defend themselves."
rhubarb, poke!
@DSM I believe it's fine that we argue or have contentious topics.
I think the rule that covers it is the "Be nice to one another"
If someone can't say "sod off, I'll believe what I want," that's a personal flaw. Not that I've seen the conversation get that heated.
When things either get too ugly or "too civil", I or another owner step in, and that's all that's been needed in the past.
I think I'm more liberal than you guys. Some conversations have been shut down that I found mostly harmless.
We've had polite discussion about religion in the past and it's fine, but there's a difference between discussion and discussion. Me discussing Ramadan with someone and how they are looking forward to breaking their fast is great. Two people squaring up for a serious religious debate could, eventually, cause trouble.
Not that I'm questioning your administrative style - shut down as you see fit.
Whether you shut down the debate before it gets to that, that's up to individuals to decide.
Though the last time I discussed Ramadan with someone, a 3rd member went on a racist tirade and accused people of the Muslim faith of various crimes and abuses. He was promptly flagged and hasn't been back since.
It's not like there's a lack of places to discuss such things.
My belief is that if a vast majority of the regulars are typing "oh god, leave it, shut up, seriously pack up your shit and feck off," then shut it down. If we're all talking about what various sky wizards we support, that's fine.
But, by that same argument, there's not a lack of places to discuss scottish politics, etc
One thing that is not applicable for this room is stuff that's NSFW/too sexual.
Sure, that's one thing that's non-offensive, but is rightly clamped -- most of you are at work.
That's not RO policy, that's SO policy.
I think I'm more likely to get in trouble due to the cute animal pictures, than due to NSFW text discussions XD
Rule #5 exemptions probably apply. :-)
a 500x500 px rabbit is visible from across the room, the word "butt" in 10 point font is not
Lol, butt.
But I chat at my own risk and I recognize that. Don't not post rabbits on account of me.
Any more AOB or comments on topics?
If anyone wants to integrate KevinScript into a sopython project, my licensing rates are very reasonable!
When KevinScript licensing becomes a topic I think a meeting is near its end.
Right bangs gavel thank you, my lovelies, for attending!
I actually managed to write a page of thesis while in this meeting, I am rather impressed.